ARE THEY FINALLY GETTING IT???? 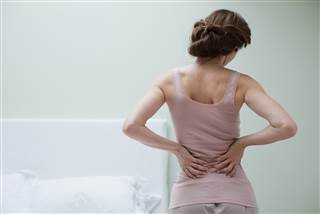 Patients with lower back pain should try heat wraps and exercise first, and prescription drugs should be used only as a last resort, a leading doctors’ group said Monday.

New guidelines from the American College of Physicians detail just what works and what doesn’t for lower back pain, which affects a quarter of Americans at any given time.

“Given that most patients with acute or subacute low back pain improve over time regardless of treatment, clinicians and patients should select nonpharmacologic treatment with superficial heat massage, acupuncture, or spinal manipulation,” the American College of Physicians says in its new guidance.

It may be a big change for many doctors, who often turn to pills first for patients who are in pain.

“For patients with chronic low back pain, [the] American College of Physicians (ACP) recommends non-drug therapy first,” the organization says in the new guidelines, published in the Annals of Internal medicine.

Heat wraps, massage and exercise can all help, the group said.

“ACP emphasizes that physical therapies should be administered by providers with appropriate training.”

“Physicians should consider opioids as a last option for treatment and only in patients who have failed other therapies.”

If none of those helps, then over-the-counter drugs such as ibuprofen or naproxen can be tried, the group says. Acetaminophen, the active ingredient in Tylenol, has been shown in several studies to do little to help back pain, it added.

Only if nothing else works and the patient is still in debilitating pain should a doctor try prescription drugs, the ACP says.

“Physicians should consider opioids as a last option for treatment and only in patients who have failed other therapies, as they are associated with substantial harms, including the risk of addiction or accidental overdose,” said Dr. Nitin Damle, president of the ACP.

Monica Afesi of New York says yoga worked for her.

“I have had back pain for about 20 years, and it started off pretty mild,” Afesi told NBC News.

“In their last six or seven years, it bothered me to the point where I had to go to chiropractors and get help that way,” she said. “I have trouble bending over to feed my cats. I have trouble picking up my keys if I drop them at the door.”

To her surprise, yoga helped. “If I’m feeling an onset of pain, I know I can come into class, take a class and every time I come into class and finish. I feel taller. I feel stronger. My spine feels longer.”

“The number one cause of lower back pain is poor posture and poor sitting,” West told NBC News.

“If it works, you’ll know relatively soon for low back pain.”

The evidence backing yoga to help back pain is not strong. But there are many different types of yoga, and West said the instructor is important.

“We often hear people being told they should just do yoga to help their back, and that can be problematic, because we have had students come to us saying the yoga practice did increase their problem,” she said.

“That is not necessarily the fault of the yoga. It was just the wrong practice at that time for the problem the student might have had.

“Pain should never be there, and in fact, our motto is ‘no pain, no pain,'” she said. “No student should be forced into a pose.”

West said patients should make sure yoga instructors are qualified and know about their back pain before they start.

Alternative therapies in general are worth trying, said Houman Danesh, director of Integrative Pain Management at Mount Sinai Hospital in New York. Evidence also backs the use of acupuncture.

“Overall, it’s a very safe thing to at least try. And if it works, you’ll know relatively soon for low back pain.”

There is not enough evidence to show whether antidepressants, benzodiazepines (drugs that include Valium), anti-seizure medications or opioids even help lower back pain, the ACP said.

And there’s some evidence showing that ultrasound and TENS (transcutaneous electrical nerve stimulation) do little or nothing to help, the ACP said.